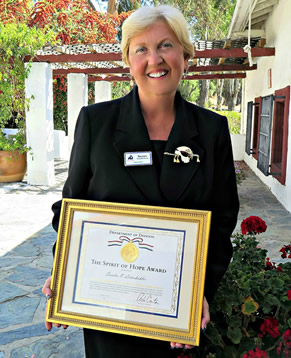 Originally commissioned by the USO, The Spirit of Hope Award was inspired by Bob Hope’s dedication to the men and women of the United States Armed Forces.  Since 1997, this award has been presented by the Wiegand Foundation, Inc. to distinguished Americans and organizations whose patriotism and service to the troops reflects that of the late Bob Hope. In keeping with the spirit of the award, the Navy has proudly submitted a nominee, annually since 2005, who has epitomized our core values and the selfless spirit of Bob Hope: duty, honor, courage, loyalty, commitment, integrity and dedication.  Their tireless contributions to the Navy have significantly enhanced the quality of life of Sailors and their families serving around the world.  Past recipients have also shown a true desire and deep devotion to uplift the spiritual, social, educational, and entertainment needs of the men and women in the United States Navy.

Sandra K. Lehmkuhler
Nominated by the Navy Sandra Lehmkuhler served as the founder and president of the board of directors for the Warrior Foundation-Freedom Station. Through her leadership, this organization improved the quality of life of more than 1,400 service members and their families. It provided travel support to more than 350 parents of injured service members, purchased 325 plane tickets for wounded warriors traveling home for the holidays, and acquired mobile devices loaded with specialized software that assisted 13 warriors with the impact of traumatic brain injuries. The foundation procured special sunglasses for those injured by improvised explosive device blasts, as well as service dogs, modified combat boots for prosthetic limbs and lightweight wheelchairs to increase the mobility of injured service members. Lehmkuhler opened Freedom Station, a 12-unit recovery transitional center and housing complex designed to serve medical retired warriors with the acclimation time, guidance and resources to successfully transition to civilian life.